Fitbit Force: After One Week

Just over a week ago I purchased a Fitbit Force for myself, a Flex for my wife, and an Aria wifi digital scale.  After the first few days I wrote my initial review HERE.  With more time to adapt and understand the devices deeper I’ve returned to share my thoughts, more data, and more about our experiences thus far.  Enjoy!

Short, sweet and to the point: the scale works as good as any other scale, with a few gimmicks you want and some you probably should ignore.

When compared to our existing and relatively new generic digital scale, the figures shown on the Aria appear accurate as recorded over the past week.  From one day to the next if one scale was up a half-pound, so was the other.  And for whatever it is worth they never varied in total weight shown by more than a half-pound.

However, if your goal is weight loss then you should ignore how the Aria numbers compare to other scales, and focus on how that number changes using just one scale over time.  In that capacity the fact that the Aria shows in tenth increments compared to the two-tenth increments of our old scale is a step up in accuracy/data.  (When and how do you weigh yourself?  Read THIS article for some pointers)

Although the Aria scale shows your body fat data, that may or may not be a good thing.  I’ve read enough articles to choke a horse about how this data is not reliable (examples HERE and HERE).  And my wife was quick to point out that female bodies fluctuate even worse than men (as noted HERE).  Over 8 days of testing my body fat ranged from 19.1% to 20.3% for a total then of 1.2% from highest to lowest.  Take this all with a grain of salt.

If you dismiss the body fat number this leaves you only one real benefit.  That is the ability of the scale to use the built-in wifi to upload my data to the cloud.  This saves me the step of recording it as I had been, into MyFitnessPal manually.  And since it identifies various users, my wife’s weight privately uploads to her Fitbit Dashboard without my ability to see the data.

Should you buy the Fitbit Aria Scale?  Consider that you can buy scales without wifi or body fat % that are decent quality for 25% the cost of the Aria.  If you can justify the higher price for the body fat metrics, and the self-uploading-to-the-cloud feature, then go for it!  However if you don’t mind logging your weight data manually (into Fitbit, MyFitnessPal, a spreadsheet, or your site of choice) then I’d probably suggest going the cheaper route, as your money is better spent elsewhere.

Initial data taken the first weekend was not favorable for the Fitbit as noted in my original blog post.  However as I moved into the work week where I took less steps in general the data seemed to level out and my comparison between Azumio’s Argus App and the data from the Fitbit were never more than 4% apart.  During the work week (Monday/Tuesday/Wednesday) my steps were under 5000 as recorded by both devices/apps.

Yet as my steps increased and we headed into the Thanksgiving holiday weekend, the data once again started to differ.  This time I had a good reason to expect variations.  On Thursday and Friday I used my Schwinn Airdyne stationary exercise bike.  On Saturday I used the treadmill (more on that later), and on all three days I performed strength training exercises.  During all of these workout routines my Fitbit was worn (on my wrist) and my phone was placed next to me and NOT worn.

Data above shows steps and distance taken from Argus and Fitbit.  However before we can analyze this data we need to see how many steps the Fitbit recorded during my exercise periods.  Note that even though I used MyFitnessPal to manually record my exercise data & caloric burn, the Fitbit still saves these steps in your total count.  It will reconcile the caloric burn to show only what you entered during that time period of MyFitnessPal, but the pedometer records remain intact.

On Thursday my steps taken during my workout time accounted for around 1,800 total on the Fitbit.  If you adjust for that then the Argus actually recorded more steps that day.  Variance was around 18%.

On Friday I recorded around 1,300 Fitbit steps during my total workout.  This makes sense to be lower than the prior day, as I cut my home gym workout in third that day.  That makes the effective variance for the day 35% on Friday.

On Saturday my first portion of workout was a treadmill jog (see next section), such that the only entry that was not step based was my home gym workout.  During that period I logged 300 steps in the Fitbit.  This bring us to an 18% variance for that day.

Given how the Fitbit works and that it sits on my wrist compared to the phone at my hip, I’d expect these levels of variation.  And if you purchase a Fitbit with hopes that it will encourage you to be more active and aware, I feel the device is wonderful and should receive high marks.

However the moment you attempt to utilize the step data for accuracy, or caloric burn, I’m still not sure I would give it all the faith it needs to be successful at that task.  More time is necessary, so that I can compare weight gain/loss.  For example, my weight dropped 0.5 lbs from Saturday morning to Thursday morning, where I averaged 216 kcal burned beyond eaten.  So the figures do make sense, but one week is hardly sufficient time to draw final conclusions.

My recent reading and self-education indicates that some sort of heart rate monitor device would do a better job of comparing calories burned to the Fitbit.  However while it would be a good comparison of “data” — let’s face it, most of us would not be happy or comfortable wearing the HRMs on the market today.  So I’ll wait to give my final verdict as far as steps vs calories burned for another few weeks.

On Saturday part of my workout routine included a 20-minute walk at 3.3 miles per hour.  This resulted in 1.1 miles of distance covered, as per what my treadmill showed at the end of the workout.  Here is the data from the Argus and Fitbit.  Note that during this walk I DID keep my phone in my pocket the entire time to attempt to compare Argus vs Fitbit. 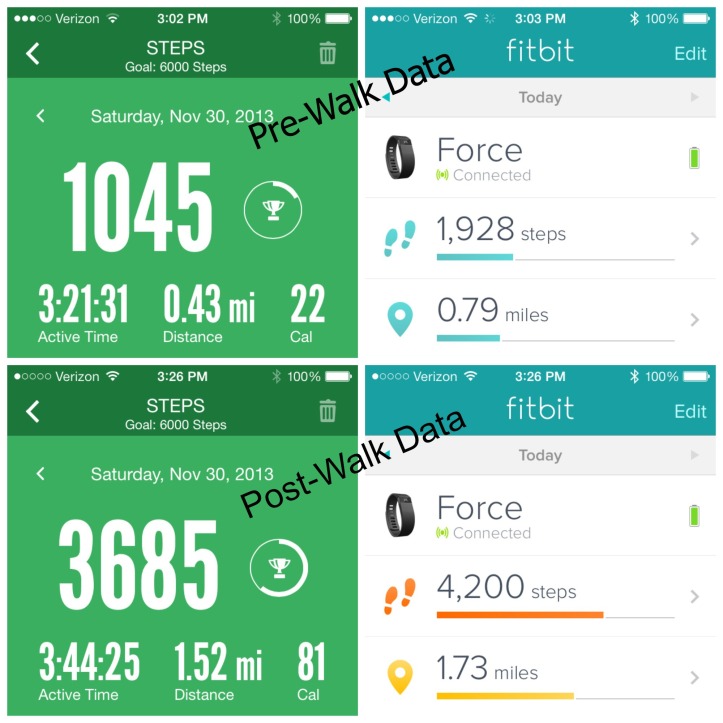 From the iPhone screen shots the Argus showed the walk was a delta of 1.09 miles and 2640 steps.  In comparison the Fitbit was 2272 steps in the app and 0.94 miles, but as I had also used a timer on my wrist we can drill down more exact data from the activity log on the website.  There it shows 2203 steps, and 0.91 miles.  The variance for the Fitbit there are steps I took to get off the treadmill before grabbing screen-shots.

In review the variation was fairly off, with the Fitbit showing 17% less distance.  I did not utilize a HRM with my treadmill hence I did not get any caloric burn data.  The purpose of this test was to determine steps and distance not calories.  Both Argus and Fitbit have my height for purposes of stride yet they still came back with different data.

Since I am not able to truly verify the calibration of my treadmill I plan to revisit this test in a more controlled environment in the future.  I’m going to find a local gym with a track that I can use to do a lap or two.  The fixed distance of that track will be the constant, and then the steps counted will matter but the distance recorded by Argus/Fitbit will matter more.  In conclusion then this test provided here was fun, but not necessarily accurate enough to justify attempting to draw from.

MY HOPES, MY FEARS

My hope is that over the next few weeks I can gather data that will provide me what I want so badly: to learn to trust the Fitbit for caloric burn with enough accuracy to use it daily for my eating habits and my weight/fitness goals.  As my wife and I discussed this over lunch she admitted that she wants the Fitbit, as most users do, to provide just enough encouragement to move, walk, and get more active.  Beyond that the caloric burn data is something she will review, but will still rely heavily on MFP which has worked over the past months.

My fear is that I’ll find the data too far off the mean.  From what I have seen the sedentary days seem to be pretty spot on with MFP, so I trust those.  But what about the days where I have 8,000 to 11,000 steps?  They show me burning more calories than MFP shows even when I enter light or moderate activity lifestyles.  Are the algorithms used by Fitbit to be trusted?  I’d like to hope so… I’m going to give them my faith… and I won’t be doing weekly updates here on out.  Other than maybe a little “data” here or there my next review will come around the end of the month.  Ciao!