It was roughly twenty years ago that I purchased my first (used) car, a 1989 Honda CRX.  Repainted at some point in a pretty shade of blue, the car was the HF trim, or High Fuel economy edition.  It made a paltry 76-horsepower but was capable of 61-miles-per-gallon on the freeway.  It was the perfect car for a budding college student, and was the first car I both owned and subsequently modified.  Two decades have passed since then, and while my tastes have matured I’m still every bit as thirsty to personalize my automobile.

Over the years as a shade tree mechanic I’ve broken almost as many things as I’ve fixed.  My experiences in modification projects range from the complexity of installing a Jackson Racing Supercharger kit on my 2001 Honda Civic Si sedan, to simple maintenance tasks like oil changes and brake pads, and everything in between.  So where I’ve swapped turbos out on 4-cylinder Volkswagen motors, and upgraded brake kits and exhausts, from all this you would think I’ve become decent at it.  But the truth is that I’ve come to realize two key observations:  first, my tool collection will never be complete to my satisfaction, and second that my lack of experience wrenching on cars full time will always put me behind the curve compared to the professionals.  This was quite certainly proven recently when I tried to modify my 2014 Audi S6, and ultimately realized it is better left to the pros! 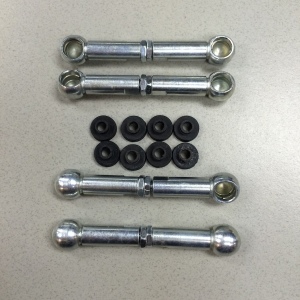 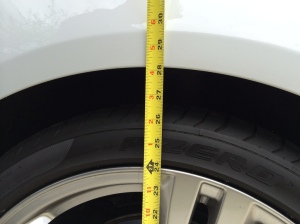 After researching various lowering options for my Audi the best bang for the buck turned out to be Airmatic Lowering Links.  They do not yet list the S6/S7 links on their page, but a quick email to them and they verified that indeed they do offer them.  Purchase price was a modest $138 shipped via PayPal and FedEx – the links showed up 24-hours later!  This was much more reasonable than the $1600 or more that H&R gets for the ETS lowering modules.  You can see the stock ride height (one corner) and the links pictured above.

SIDEBAR: Where the H&R ETS module intercepts the signal from the corner height sensors and tricks the car to lower it further, these links do the same thing in a mechanical fashion.  They replace the existing molded (fixed-length) black plastic arms with adjustable metal arms.  This allows the user to fashion the height to their exact needs and at a fraction of the cost of the module.  Installation is a bit more complex, but the end result is the same.

Researching the AudiZine forums informed me that the installation process was simple enough, so much so that I decided to attempt it myself in my driveway.  Most users managed to pop off the stock arms using a 9mm spanner wrench, but did stress the fact that it was tricky especially in colder climates.  After some hassle I managed to get the passenger front link off, but during the driver side link removal I ended up breaking the green arm that attaches (permanently) to the sensor.  At this point I decided to put things back together as best I could, but when I went to put the passenger arm back on I found that my removal had weakened the ball joint, and the green ball broke off as well.  Both my front sensors were now damaged! 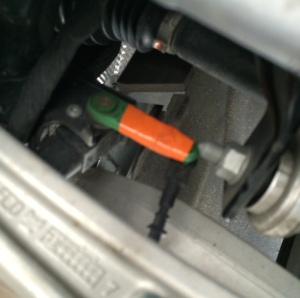 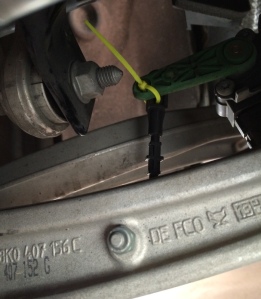 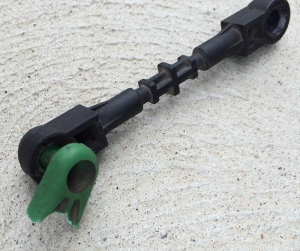 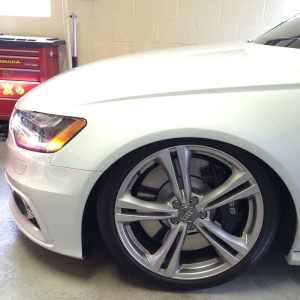 SIDEBAR: Before fixing the arms I decided to drive the car around the block with the arms unhooked to see if it would be okay as such to drive safely.  Without thinking I took the car out of service mode and told it to lower itself to drive height– but before the lack of sensors was noticed the bags attempted to air out and lower.  The photo above shows the car as low as it went (probably aired out entirely) before it finally stopped and threw a fault/error code.  It is also worth noting that the car warned not to drive over 35 MPH, and with no air it drove quite poorly.  It would be cool to be able to drop it like this for shows — someone needs to make a module that does just that!  But this was not my end goal– time for damage control.

Ultimately I needed to get the car fixed.  With my low profile jack I was able to get under the car and use a zip tie on the passenger side, and electrical tape on the driver side (see photos above) to make it so the car could be limped somewhere for repair.  With the sensors “patched” this way I was also able to get the car BACK to a normal ride height, such that the warning lights went off on the dash and the car drove fine.  Being an honest person I was not about to attempt some lie or warranty claim– so a few phone calls later I secured a plan of action to fix the car at a local shop, tuck my tail between my legs, and pay to fix it.

With my car limped across town the folks at HS Tuning squeezed me into their busy schedule to assess the damage.  It was instantly determined that a temporary fix could be attained (one that was slightly better than my zip-tie and tape methods), but that replacement sensors would be needed to fix the situation properly.  This added to my overall suspension/lowering cost as the sensors are costly and the arms are not sold separately, but at least I did still end less than half the cost over the H&R module.

SIDEBAR: Ken and Jeff both have worked on cars the better part of their lives, and their combined experience might even exceed my entire life span.  That being said, it was a bit calming to hear them say they too have broken these sensors though typically on older cars whose Midwest life have seen cold winters and hot summers.  Never the less it is known to them, as seasoned mechanics, that these sensor arms can snap.  If you should attempt this install yourself I suggest removing the front sensors (with brackets) and the rear sensors (from brackets) — and install the new arms OFF the car.  They even went so far as to slice some stress relief in the back of the black plastic arms to make removal easier/safer.  Be careful, kids! 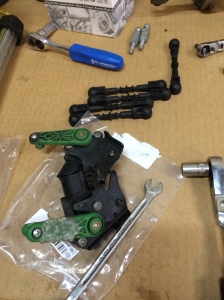 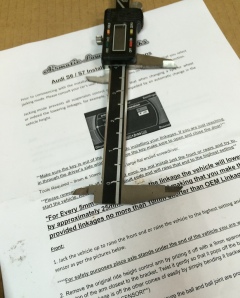 With some screws/washers they managed to re-attach the balls to the arms.  And with some very amazing two-part epoxy glue, they managed to repair the arm that snapped in half thanks to my delicate touch (haha!).  In the end the repair you see above held so well that I put nearly 1,000 miles on the car over the weekend (road trip) on that setup.  This is a testament to the quality of work that the guys at HS Tuning did even as a patch job.

In the end HS Tuning got me all fixed up a few days ago, with new sensors installed as well as the arms from Airmatic.  Somehow I didn’t manage to get any photos of the final product from under the car, so I apologize but I don’t have any photos showing the arms in place underneath.  This is probably because Dennis showed up in his black S6 which was a huge distraction.  Nice to meet you Dennis, the car looks AMAZING! (now I want 21″ 3pc wheels!)

Let me just say again a HUGE thank-you to HS Tuning for their efforts.  Not only did they REALLY squeeze me into their schedule twice (one to fix the car, and again just days later to replace the sensors and finish the install)– but they also provided VERY professional service throughout the entire process, offering thoughts, feedback and advice.  If you need anything done on your European car, be at a RennTech piece of hardware for your Mercedes, or an APR Chip tune for your Audi, or a big-turbo kit for your Volkswagen, these guys do it all from service to performance.  They specialize in Volkswagen, Audi & Porsche, but have been known to dabble in BMW and Mercedes too.  Thank you so much, Jeff, Ken and Nate at HS Tuning!!  (these guys also updated my APR software and sold me an APR mobile dongle, as I mentioned in a prior blog post)

With the suspension finally dialed in correctly it was time to get my stock tires moved over to the HRE FF01 wheels that I scored (used) off the forums.  And since the car sits approximately 3/4-inch lower now (20-25mm in that range roughly), it was due for an alignment.  After shopping around the local dealerships that I’ve dealt with in the past it was determined my best option was to visit Classic Volkswagen, where many years of VW ownership has provided me a great relationship with Tom, Matt, Rebecca and the gang.

Below are some final photos of the car all cleaned up, sitting lowered on HRE FF01 wheels.  These wheels are 20×9 ET35, compared to the stock 20×8,5 ET45 wheels, so they sit out 16mm from factory.  That spacing plus the lowered height makes for a pretty stance, and I’m quite pleased with the final results.  Though I could have gone lower, there is already a noticed “slight” increase in bounce/harshness in Dynamic mode over the stock ride quality, so I feel this is a good overall compromise and height setting.  And the wheels are as flush as I would want, any further and they would blast stones on the fenders too much.  Perfect!

Now I just need to remember my lesson next time, and leave the tinkering to the experts when it comes time to install the performance parts!  Drive safe, everyone! 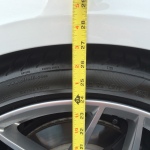