.  But in a non-traditional battle I’ve tested them in a single mode only, Automatic Mode.  Does one prove better than the other?  Can judgement even be passed?  Let’s find out!

Unlike many of my friends, I’m not into photography. That isn’t to say I don’t enjoy good photos, on the contrary, I love art and photography and appreciate it deeply.  But when it comes to taking photos, I suck.  I’m the last person to want a DSLR or any sort of fancy camera, and I have zero interest in learning more about aperture and F-stops and stuff like that.  I recall some of it from a photography class in grade school, but even then it didn’t interest me (though I did enjoy developing film in the dark room with stinky chemicals).

About a year ago I picked up the Sony shown here, primarily to take photos that would be of better quality than my iPhone would permit.  This camera has served me well for the last year, for events like swimming and gymnastics for my daughter, but also family functions such as birthdays and the likes.  At first the camera was great, but it became a bit big and bulky, and as of late the darn thing just never gets picked up.  Then I recently saw some photos that my brother had been sharing from his Canon of the same model shown here.  I was amazed at the quality of shots coming from such a small device and had to get my hands on one to compare.  And as such, this test was born. 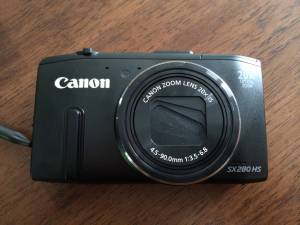 First we’ll start with my device for the past year, the Sony DSC-HX300

.  This unit handles up to 20.4 megapixel shooting with an amazing Carl Zeiss lens offering 50x optical zoom, and up to 100x digital zoom.  Add in SteadyShot image stabilization, AVCHD 1080/60p Full HD video capabilities, a tiltable 3″ LCD display, you’ve got quite a piece of hardware.  But at 650g this thing is far from a featherweight.  Offsetting the rather bulky size is great “in hand” feel, the device is easy to hold steady and comfortably.  But carrying it around for long periods of time can certainly be a daunting task.

, which retails for half as much as the Sony.  But half the price does not mean half the function, and you’ll still find a 20x optical zoom (4x digital beyond that), 12.1 megapixel maximum, and surprisingly the same 3″ LCD display (fixed) on this unit.  Video capabilities are identical on this unit to the Sony, as are features like SteadyShot.  By losing the zoom reach that the Sony offers, you also shed some weight here, down to 233g or only about a third of the competitor.  As you can imagine this makes holding and carrying the unit far superior, though I did find it harder to keep it steady on far distance shots (extended zoom-in) or any other situations where you may desire a two-hand-hold.

Both devices have a “wheel” to spin to switch between various modes, from predetermined scenes that might aid you, to priority modes for aperture and the likes.  I’ll admit that over the last year I have used my Sony to attempt to blur backgrounds, or special modes for fireworks, but 99% of the time I take a photo in automatic mode.  I did play around with these gimmicks on the Canon and it seemed comparable, but at the end of the day my test here is for my purposes, which is to say Automatic Mode.

Interface on both devices was nice, with the on-screen help of the Canon a step up from the Sony.  But I found the mode-wheel selector on the Canon a bit too hard/firm to spin.  Neither of them would get A+ interface scores, but both are solid B+/A- range.  It was worth noting that when both were turned down to 5-6MP, the Canon still edged out the Sony in speed (you could take your next concurrent photo more swiftly on the Canon, indicating it had a faster processor or such).

SIDEBAR: Back when I purchased the Sony as a bridge-camera, I wanted a good point-and-shoot but couldn’t find one with a zoom that fit my needs.  This was specifically for things like my daughter’s gymnastics show where seating distance requires a good zoom.  Perhaps the Canon’s zoom will be enough to justify a smaller device?  Because again I’m an automatic-mode kinda guy, who enjoys the occasional “scene” mode too. Understand then that my review here is for a person who likes basic photography, and doesn’t need a lot of bells and whistles.  This is far from a full and proper camera device review!

Setting both devices into Automatic Mode, I went to the great outdoors.  Inside photos under artificial lighting would also have been a good way to compare, but the weather was too nice to ignore.  I’ll admit that this test is half-baked at best, because I was already partial to the Sony having owned it for a year, but also partial to the small size of the Canon for it’s weight/bulk savings over the Sony.  My goal was just to quickly test in a single day/outing the two back-to-back, see which had a better quality and/or zoom capabilities.

Below is a sampling of 15 different photos that I took at the same time with both cameras.  On the left (first) are the Sony DSC-HX300 versions, followed (on right) by the Canon PowerShot SX280 versions.  Click these thumbnails to see larger versions of each, which have been processed for size only via Preview on my Max OSX MBA device.  They are otherwise uncorrected in any way.

You may find two images where the Sony got a bit closer to the focal point.  This was my attempt to illustrate the zoom differences.  There was a street sign I used as a reference point (not shown here) that was about 150-yards away.  The Sony was able to zoom such that the sign filled the entire shot, where the Canon fell short and the sign appeared about 1/2 as large in the shot.  Without a doubt the Sony gets you closer, but does it do so with equal photo quality?  I’ll let the images speak for themselves.

There is no clear winner here for a few reasons.  First off, my photo gallery was limited to outdoors shots, with no indoor comparison.  Secondly, I think it would be unfair to assume that someone who wants 50x zoom might be able to settle for 20x, or vice versa.  But for me I’m in a serious pickle because I found the color accuracy better on the Canon, the portability a huge plus, and the zoom was in most cases adequate.  I’m hard pressed to imagine a situation where I’d need more zoom (I could probably just crop an image after taking in a high enough resolution).  So for me, the transition to the Canon might happen.

Thanks for reading.  I hope you enjoyed my pseudo-comparison here.  In this case neither David nor Goliath are losers— I think you’d win, whomever you put your money on!