It seems like each week brings a new fitness device or activity tracker to the market.  Many of these emerging devices attempt to be part smart-watch, part health device.  This drives up the price to a level many will never consider spending.  Focusing instead on the lower-cost end of the spectrum is the new Misfit Flash.  Offering a basic feature set they have one goal: to be a great, entry level activity tracker.  And it does so quite nicely!

When you consider that the Fitbit Flex and Jawbone Up24 devices cost $99 or more, it seems like it was only a matter of time before one of the big players came out with a device far cheaper. Sure, the Fitbit Zip comes in at roughly the same cost as the new Misfit Flash, but you can’t wear it on your wrist, it isn’t water proof (just resistant), and it doesn’t show the time. 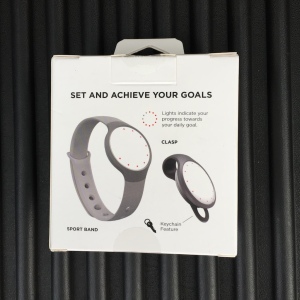 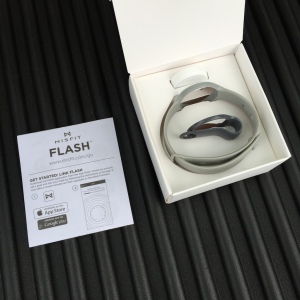 Picking up the rather small box you wonder if there really is much inside, but like the Misfit Shine that I’ve tested before (HERE and HERE) it comes with two straps, and enough documentation to get you started.  First impressions leave you worried about the solidity of the hardware, though my week long testing found this unit rugged enough to pass my approval.  It is rather light, and plasticky feeling, and the band has a bit of a “sharp” edge to it– but nothing you’ll cut or hurt yourself on.  It just doesn’t feel the part that its big brother does, but for the price that is to be expected.

Note that Misfit heard the complaints from users with the Shine about the standard included band not being firm enough, where people have issues with the unit popping out.  To resolve this issue the wrist-band that is included is tapered, and the new Misfit Flash mounts from the backside only.  That means when you are wearing it the band is essentially holding the unit against your wrist (don’t worry, it also still snaps into the band).  It works well, and I never once had any issues with the device falling out or apart, so bravo Misfit, job well done.

Comparing the included band to the Fitbit Flex, you’ll find that this band (identical in style to the Shine) is marginally easier to put on your wrist than the Fitbit unit.  Both still lack the simplicity of a clasp, like the Polar Loop, or the watch-style closure of the Misfit Leather Band which can be purchased separately for the Shine.  Given the choice, I’d take the standard Misfit band over the Fitbit any day. 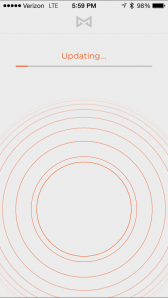 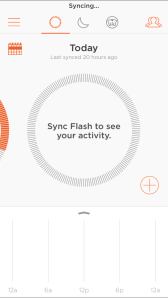 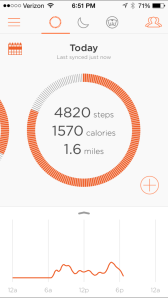 After syncing the device to the iOS app there was a quick update (firmware) and I was on my way.  As I mentioned earlier, I’ve tested the Misfit Shine before, and this new Misfit Flash uses the same app.  Since it works the same I won’t spend a lot of time rehashing.  Simply put, I like their app for a few reasons.  First off, it is simple much like the Fitbit app.  Secondly, you can customize your step goal, something the Withings app does not allow.  I’m not a huge fan of the points system they use, but it is easy enough to figure out their conversion, and you can still get access to view your steps and distance, as shown in the images above.

One newer feature that Misfit has in their app is automatically syncing the device.  However, I was not able to successfully get this to work during my period with the device.  I’ll update this blog post if their support team ever replies to my online request for help with that matter.  Opening the app I did find the device would sync immediately, and I did have background refresh turned on, so I’m not really sure what the issue was there.  Still, beyond the auto sync not working as desired, it otherwise performed in-app and on-wrist as you would desire.

For some time the Misfit app has had interactions with other programs such as IFTTT, but for me the best recent addition was their support for MyFitnessPal, also shown above.  However, again because it did not auto sync, I would have to first open the Misfit app, get it to sync, which would then auto push my steps/caloric burn to MFP immediately.  This was a bit of a hassle, but more on that later.  The bottom line is that it does work with MFP, sending steps and calories over, which is a huge plus if you’re using their app to record your food intake.

Another two items that Misfit aimed to improve with the Flash was the activation of the display LEDs, and the quality of those.  As the video shows above they did a superb job– the click feature in the body of the unit makes it super easy to activate the display, and the brightness of the red LEDs in this unit seems far superior to my prior Shine.  Again, a great improvement and a surprise given this item is actually half the cost.

Misfit sells their Beddit Sleep Tracker and Wellness Coach if you have the cash and enough concern about your sleep to analyze it with that kind of hardware.  Even if you opt to not spend that money, the Flash, like the Shine, can be worn to track your sleep.  I don’t like to wear my trackers in bed, so I did not test this feature.

If you have a Fitbit Aria Wi-Fi Smart Scale or a Withings WS-50 Smart Body Analyzer smart scale then you can create an account on IFTTT and have it automatically push your weigh-ins over to the Misfit via the power of their system.  This saves you the hassle of manually recording your weight in their app.  There are other slick features that the Misfit will tie in with over there, such as turn on/off lights when you enter/exit sleep and such.  Be sure to check that out if the “internet of me” is something that interests you.

When you take a look at everything that the Misfit Flash does (especially when compared to the 2x priced Misfit Shine) you really have to wonder how they manage to make a profit selling this device for only $50.  It has a battery life that lasts a year, so you won’t have to charge it weekly like the Fitbit Flex.  It has a much easier to read display than the Flex, where you can just visualize the red dots around the circle to get a faster view of your goal completion.  And with the clickable center core, it is far easier to activate– plus it shows the clock, which the Fitbit does not.  (Sidebar: when clapping my hands, my Fitbit often lights up which is annoying in dark settings like a concert).

During my testing the only true issue I had was the auto sync not working and I hope/suspect that will be fixed soon.  Once it is this will become the best bargain activity tracker on the market, and is certainly a better purchase than the Flex.  If you don’t plan to wear the device on your wrist, the Fitbit Zip is worth considering too as I still love the Fitbit software the best, and it has similar traits as the Misfit.  But it doesn’t have the ability to track swimming or cycling, or act as a wrist watch– features that give the Misfit hardware a leg-up on the competitors.

If you want the best high-end fitness activity tracker, see my recent post HERE about the Garmin Vivofit device.  However buy the time you add in a heart rate monitor, that unit can cost well over $200 which is more than many want to spend.  That is great for the hard core athlete, or even someone who is getting somewhat serious about their cardio exercise.  But as I said when I opened this blog post, there is a huge market for those who want a cheaper, simple device.  One that tracks steps, yet also adds features like showing the time.  One that also works for non-step activities.  Something that is water-proof to 30 meters, and comes in fun colors like Zest and Fuchsia.  If that sounds like something of interest, be sure to consider the Misfit Flash device.  It truly is best entry-level tracker you can buy right now!

Sharing my life experiences. Interacting with technology. Digital self-expression. Binary is black, white, and many shades of grey. View all posts by Ari Jay Comet