Electric vehicles are all the rage these days, as well as their hybrid counterparts.  Beyond the big player that is Tesla Motors, auto news is rampant with excitement about the Chevrolet Volt and Nissan Leaf.  And let’s not forget the new BMW i3 that just came out, too, to join ranks with the Mercedes B-Class, Kia Soul EV, and others.  All of these vehicles share a common need for electricity, and our home now hosts two such vehicles.  Due to our second EV joining the stable we recently upgraded our electric vehicle supply equipment (EVSE) at home, allowing me to write a fun comparison as we migrated from a Schneider Electric EV2430WS EVlink to our new Leviton EVB40-PST.  Check it out!

Most of the cars out there share a standard charging port architecture as defined by the SAE J1772 standard.  You can find public charging stations all over the glove that use this plug standard, support by such vehicles as the:

However, much in the same way that Apple uses their own proprietary Lightning connector instead of the standard Micro-USB, one electric vehicle (EV) manufacture strays from the EV norm.  That of course would be Tesla Motors, whose cars receive charging from a similar port, but with a connector that is not SAE-compatible.  They do at least offer an option, by way of their SAE J1772 Adapter, should you wish to charge the Tesla using a home or public charge that sports the SAE cabling.

For the past two years The Wife and I have enjoyed cruising around town in our 2012 Nissan Leaf (see other various articles about this appliance here on my blog).  We still have 19 months left on the term, and thus far have achieved roughly 20,000 miles of 100% electric driving.  During the winter months the Leaf’s already limited range doesn’t fare so wonderfully in the harsh, cold winters of the Midwest.  Even during the summer the range is such that we haven’t been able to do as much of our driving with the Leaf as we would like.  So we took the plunge and picked up a brand new 2014 Tesla Model S 85.  (See my forthcoming blog post for a full run-down on the Tesla as it compares/contrasts to the Nissan).

Since we’re now a 100% EV household we wanted to make sure the EVSE we had would offer the best options possible.  We upgraded our equipment to accommodate the Tesla, which I’ll explain below.  Enjoy!

When we first picked up our Nissan two years ago we instantly knew we would want to charge faster than a standard 110v outlet cable would allow.  At that point in time we picked up our Schneider Electric EVlink Electric Vehicle Charging Station.  Pricing for this unit has dropped somewhat in the past two years, as have most EVSE’s thanks to demand and popularity.  We chose this unit back then, as it was one of the higher rated ones, at a fair price, from a brand we trusted.  All of those traits still stand today.

During our 24 months with the Schneider EVlink we never had a single issue, the unit always worked flawlessly.  This unit charges at 30A 240V, includes an 18-foot long charge cable, with the SAE J1772 standard handle at the end.  It needs to be hard-wired to the wall, and is easily installed by any professional electrician for very little money or time. (Your home may require more work than ours, but most folks have EVSE installs done for $200-300 USD).  Included with the wall unit you also get a hanging bracket to connect the handle when not in use, and wrap the ord.  Additionally, they offer a (gimmick) photo printing option to customize the cover of the unit, should you choose to do so (we did not).

If there is one feature this unit had that I missed after we upgraded to the Leviton (below), that would be the green circle display.  Although both units have indicators for when charging, the “ring” on the Schneider was nice for two purposes.  Firstly, when you came down to your garage in the morning you could see how long the car had spent charging (each bar represents an hour of charge time). And secondly, this was also a nice way to verify that your car had indeed charged, for some peace of mind.

In truth, we did not need to replace this unit as it worked fine for our Nissan, and testing verified it worked on the Tesla, too.  But since the Tesla could charger faster with higher amperage we decided to upgrade to the Leviton.  For MOST of the EVs out there today, the 30A power of this unit is adequate and will please general buyers.  As such I highly recommend the Schneider EVlink as a GREAT option! 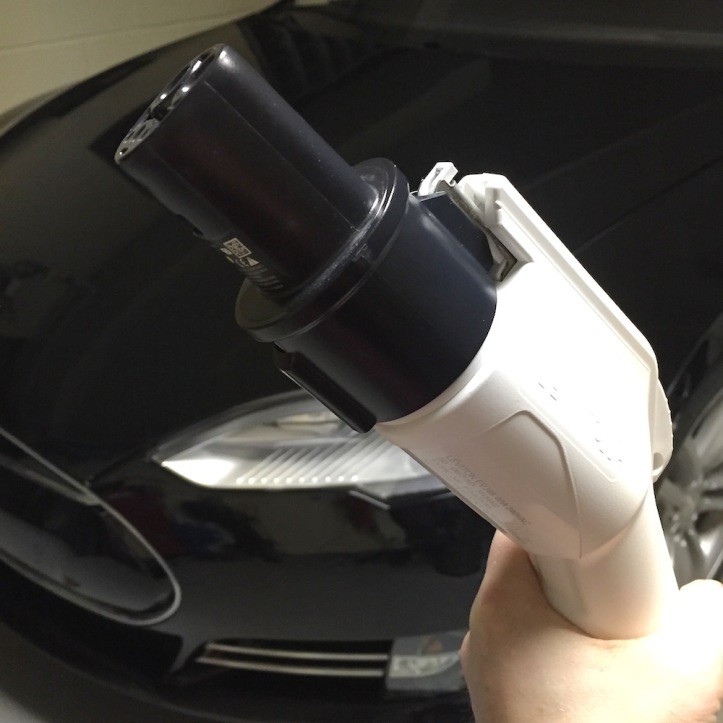 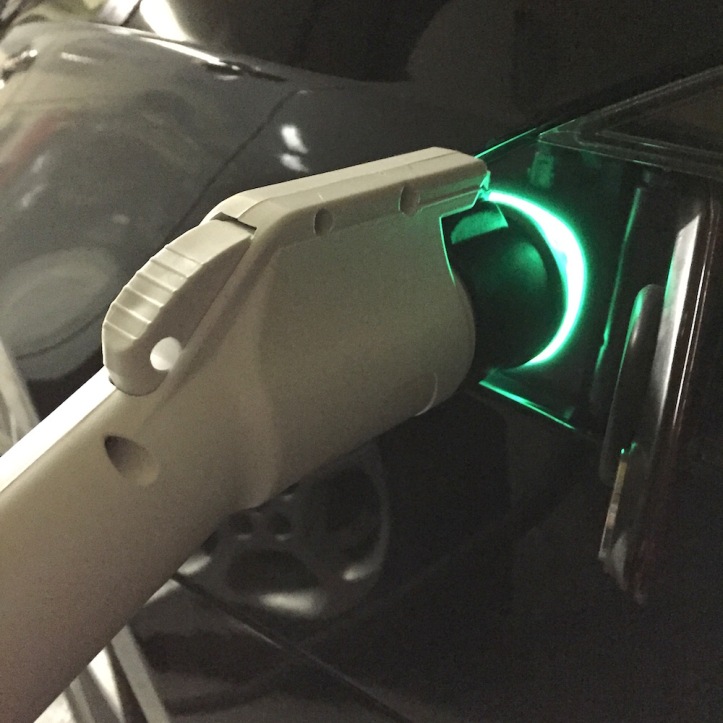 Various vehicles (Toyota RAV4 EV, Tesla, and others) can benefit when provided with more than just 30-amps of power.  After researching current options I managed to find a unit that would work BOTH for our existing Nissan Leaf, as well as offer some bonus to the Tesla Model S we acquired.  Additionally, I wanted to make sure whatever we purchased would be “future friendly” for other EVs we might end up with down the road.  This meant that I wanted to stay with the SAE J1772 standard, and would utilize the aforementioned adapter from Tesla to charge that vehicle at home.

We settled on the Leviton EVB40-PST Evr-Green 400 Charging Station, which utilizes a surface-mounted NEMA receptacle instead of being hardwired.  They also offer the EVB40-P5T, which is for flush-mount receptacles.  Both units are otherwise identical, utilizing a 50A breaker (the Schneider used a 40A breaker).  Since the previous unit was a lower amperage, my electrician decided to play it safe (even being under 100-ft run) and upgraded the 8-2 wire to 6-2 for this application, as well as the breaker at the electrical panel (box).

Note that you will need to purchase and utilize the Leviton EVK05-M Evr-Green Pre-Wire Installation Kit for 32 & 40A Charging Stations which includes the necessary hardware to prep your install location.  It came with the NEMA receptacle as well as the bracket for the wall.  While the Leviton does command a price beyond the Schneider, you do get more than just 10-amps extra power.  First off, the cable is 7-feet longer (25 vs 18), and a more durable thicker diameter.  Secondly, the unit becomes portable (especially with the PST version) should you ever need to relocate it quickly, easily, and without professional assistance.  Lastly, though the footprint on the wall is larger, the unit has it’s own receiver, eliminating the need for the hook to hang then handle or wind the cable, which also now wraps around the unit itself.

Fit and finish between the two units is the same, with the only real notable difference being the added heft of the thicker, longer cable.  For our home the longer cable was a treat, because it meant we didn’t have to rearrange who parked where, nor did we have to back-in the Tesla to reach the charger. With this new configuration both cars fit perfectly, and we can charge them all within easy reach.

Speaking of the faster charging, during my testing I managed to play around with 3 different Tesla Model S vehicles at my house (two test drive/demo models, and my final S85 unit).  Here is a shot while charging the first car I had access to on my original 30A Schneider setup: 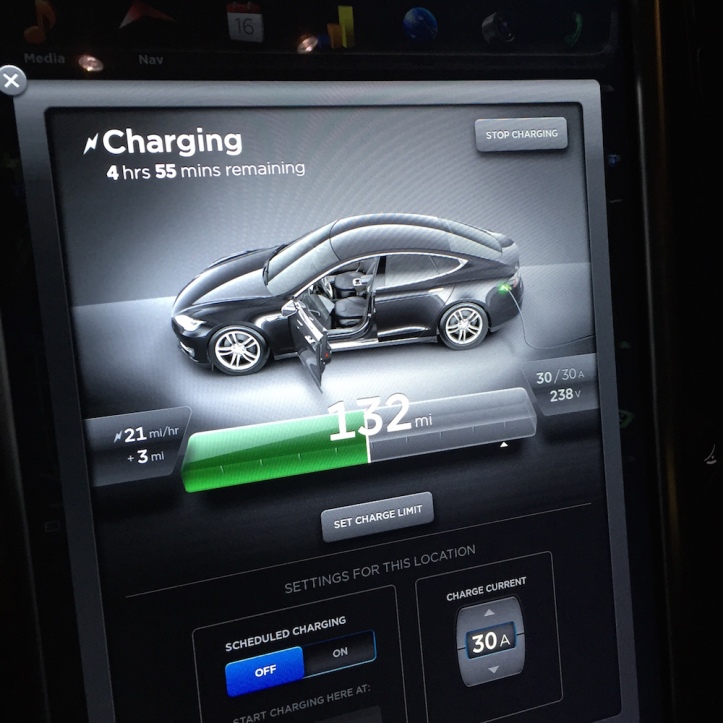 And then here is testing a loaner S60 that I had for a week with the upgraded 40A EVSE from Leviton: 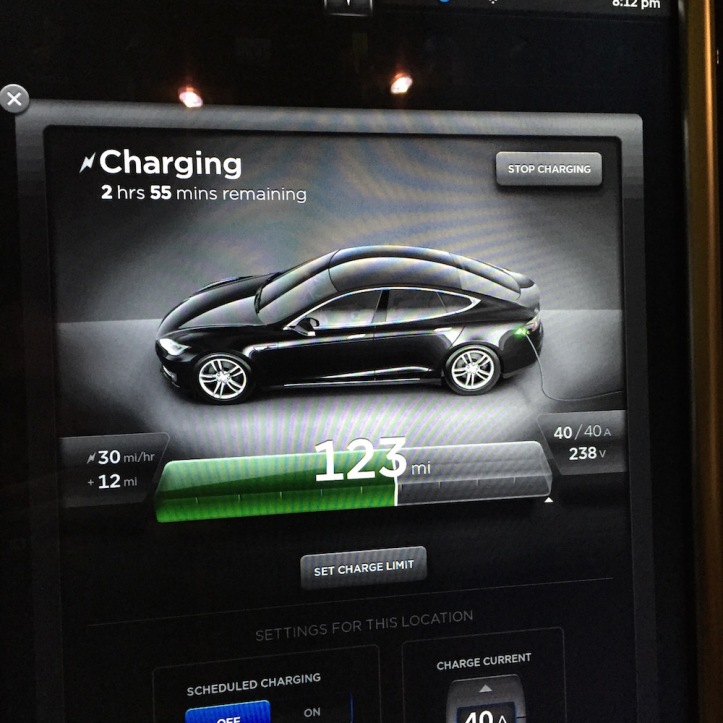 Now to be honest at one point I noted that the original car did level out at 22 mi/hr charging with the Schneider, which is very respectable given that Tesla only rates 30A charging at 19 mi/hr.  With the upgraded unit we saw a steady 30 mi/hr charging.

Simple math shows that 40A vs 30A is 33% more power, yet 30 mi/hr charging vs 22 mi/hr charging is a 36% gain– leaving us with a 3% bonus in speed!  Overall the money spent since I already had a working charger might not be easily justified given the long range of the Tesla and infrequent charging needs, anyhow.  But for us the longer cable is a big benefit, and it will be nice should we ever need to “share” charging on the same day, to have the Tesla need less time with the EVSE.

In conclusion, if you ae new to the market, buying your first EV and needing an EVSE for home, I’d probably recommend stepping up to getting the Leviton EVB40-PST Evr-Green 400 Charging Station.  Thought it lacks the display “green” charging ring, it does still displays LEDs when the unit is on, charging, etc.  And though the Schneider EVlink is a solid unit that gave us two great years of service, it seems like many of the new vehicles coming out will be capable of using the extra 10-amps of juice.  So long as you’re already spending the money for faster home charging (read: higher volt/amp power), you might as well go all-in with a good, future friendly piece of kit.  Happy Holidays & Safe driving!