“Hey Siri, set the living room lights to 50%” I barked at my phone.  Seconds later, as if I was living in some futuristic world, my lights were on.  My phone responded politely. “You got it, Ari.  I set both of the living room lights to 50” sung the small electronic portal in my hand.  Has the ability to control one’s home with your voice finally arrived?  Let’s take a quick look at the new Lutron Caséta Smart Bridge (L-BDG2-WH) with Apple HomeKit Siri capabilities to see just how science fiction our lives may really have become!

Right now the list of compatible devices that work with Apple’s new HomeKit platform is small (see HERE), but that list is growing fast.  Later this year the spectrum of compatible products is really expected to hit its stride, when many of the earlier-announced partners release their respective new hardware.  One of the interesting aspects that I’ve seen thus far is that many devices require an upgrade in order to work with HomeKit.  And not just a software update, rather in most cases a brand new shiny piece of hardware.

For many of us that will come as a shock, and an unwanted expense, since the older hardware you have might not be upgraded to HomeKit compatibility simply by means of software.  In my case the old Lutron Smart Bridge that controlled my home lighting continued to function, but added no HomeKit functionality even with the new iOS app update.  In order to harness the HomeKit features I had to upgrade my hub to the Lutron L-BDG2-WH Smart Bridge, which adds Siri voice integration.

Another inconvenience in my case was the fact that I had to contact Lutron support to have them remove my old hub, in order to setup the new hub using the same email address.  (One hub per email address, apparently).  This is something Lutron needs to resolve moving forward.  For reference, I have well over 20 switches, dimmers, and plug-in modules in my home, as you can see here: 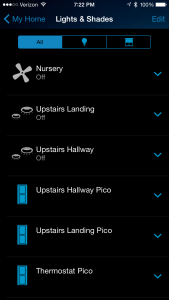 Though setup for this device is a bit more involved (given my high volume of switches), you may find this less problematic if your home has less hardware to reconfigure.  I’ve reached out to other manufacturers (such as the maker of the Chamberlain MyQ) to find out if their hardware will also need upgraded or how that might work.  Chamberlain’s support team claimed the old units “should” work though I’ll believe it when I see it (the rep’s email wasn’t very convincing).  And we can probably all safely assume certain devices, made by competitors to Apple, may never obtain MFi / HomeKit certification. 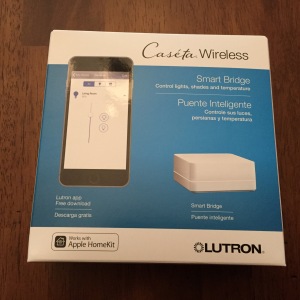 Pictured above is the box for the new bridge/hub.  One thing that I haven’t yet tested but found interesting is the mention on the back of the Lutron Smart Bridge box that using an Apple TV would allow me remote access to controlling the lights.  Though I’ve not needed this feature, and do not currently own an Apple TV, it is worth noting here that recent news indicates iOS-9 will bring updates to HomeKit in which devices will be able to use iCloud to communicate.  This should eliminate the need for an AppleTV for remote control, while still providing HomeKit functionally when not on the same WiFi as the devices themselves.  Look for more on that in the fall- but the bottom line is you do not NEED an Apple TV, unless you want to control these devices using Siri remotely.  And even then, you may not need that come the Fall.

What I’ve found most curious during the entire setup of the HomeKit experience was that the functionality is created on the app.  Specifically, the naming of rooms or zones is done at that level, rather than in some global place.  This is odd to me because it will stymie future expansion.  Right now I’m telling the Lutron Smart Bridge app to group some lights into a room called “Master Bedroom” — but down the road, what if I had another lighting app?  Do I have to be careful to name the room the same thing, so that it works properly?  Can you use more than one lighting app at a time with HomeKit?  These details aren’t clearly outlined anywhere that I’ve been able to find. 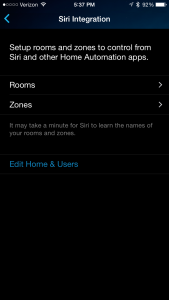 Adding a HomeKit device requires accessing some special code off the bottom of the hardware.  From there you can create Rooms and Zones, though that isn’t entirely necessary.  You can simply tell Siri to turn on/off or dim specific items by name, but the use of Rooms and Zones is ideal for grouping.  In my case, for example, I have two lights/switches in my living room, and was able to link them together for purpose of voice control. And having a split level home, I was able to group the upper, middle, and lower floors, again making it easy to turn on/off lights in those zones in a faster, more global method.

Setup is pretty basic, hence pretty simple.  All you’re really doing is again grouping items already in your home, placed together by rooms and zones.  Siri takes care of the rest.  It prevents you from naming a room the same as an existing light (to avoid complications) — but again, does this integrate somehow back into some central database in the phone?  Curious about that, again for cross-platform functionality as I mentioned.  Once you’re done setting up those items in the Lutron Smart Bridge app, it is time to play!

There are a few good articles popping up here or there showing what Siri can control and do (like this one)– but rather than just talk about it, I figured I would show you.  First off, here are some screen shots showing the functionality: 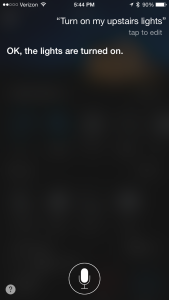 But even better than that I figured you, my precious readers, might enjoy a 60-second demo in video form.  So for my first time ever, here is a YouTube video embedded in my blog post:

Note that in this video you can see many of the upstairs lights in the background, one of the two living room lights (that wall sconce), and off to the left you can even see the foyer.  This was a good central location to provide background visibility as I turn lights on/off with my voice/Siri.

What I also wanted to show here is that while things work good, they don’t always work great.  You have to be fairly articulate in what you’re asking for; leaving out the word Light(s) may cause the action to not perform.  But the worst glitch is asking Siri to turn on a light that doesn’t exist, which in turn causes all the lights in the house to turn on.  This could prove dangerous if you have sleeping children such as i do.

Generally speaking, Siri does a good job, and the features worked pretty flawlessly.  I did find it confusing (my own fault) as to how I named things, and my wife/I realized we might not both refer to certain rooms with the same label.  There isn’t yet support for rooms to have multiple labels (i.e.: den vs family room), a feature I would like to see them add.  I’m also anxiously awaiting Apple Watch 2.0 (also slated for Fall release) which will provide voice controls right from my wrist.  The Lutron Smart Bridge does support Apple Watch with a pretty nice and powerful app, but HomeKit doesn’t yet provide Apple Watch voice features.  Again, this is supposedly coming soon!

At first I really didn’t see the point of voice control for my home lights.  Up until now I had been pretty satisfied with the Lutron Smart Bridge and its iOS app.  I’d also been pretty happy to use my Apple Watch too.  I thought that voice controls would be rather pointless.  But when you’re sitting there in a room that you suddenly realize is somewhat dark and you want to turn on the light, it is typically faster to command this by voice, versus bringing up the correct app/screen.

Features beyond Siri that make the Lutron system great include Geofencing (reminding you when you leave home to turn off the lights remotely, or turning on certain lights when you arrive home).  Later this year the updates to HomeKit will also add “Scene” support, which will allow you to use the already existing scene functions of the Lutron Smart Bridge with Siri (right now you can only turn on/off specific lights, rooms, or zones– but not set scenes).

With more HomeKit compatible devices now just weeks or months away, you can see how this will soon work.  Want to set the mood for watching a movie, with certain lights and other devices set to a specific state?  Want to tell Siri goodnight, and have her lock doors, close the garage door, and turn off all the lights?  These commands and more are just the start of where HomeKit is headed.  Based on what I’ve seen here, the next iteration of HomeKit should build upon this already fairly robust network, and as more hardware presents itself, the usefulness will grow that much more.

Now if only I could ask Siri to go get me a cold beer…..