Gumball.  GoldRush.  Bullrun.  Dustball.  These names represent just a few of the road rally events that have brought international awareness to this chic lifestyle event concept.  One of these events was scheduled to go down in my own back yard, so I decided to RSVP.  And so began the adventure…

For those not in the know, these road rally events (often called “runs”) typically involve many hundreds of miles of travel between major cities.  They often have scenic stop overs, and/or visit local car shows, such as cars & coffee events.  Many are just about driving during the day, and partying all night long at VIP events each evening.  It isn’t uncommon to hear of celebrities at those VIP events, too!  And the craziest ones have admissions costs reaching tens of thousands of dollars, drawing spectator crowds as millions of dollars of cars arrive/depart from varied spots.

Typically these more well-known events have been designed for the rich & famous, but these days more and more events are starting to crop up designed for a less affluent cross section of attendees.  One of these events was The Signature Run, based out of Cleveland, Ohio.  Pricing started around $1,500 for a single driver, for the 4-day, 3-night event covering Cleveland, Columbus, and Pittsburgh.  Some of my friends were signed up to attend, so my wife/I decided to drop $2,000 for a spot with my Porsche 911.

Thursday, June 15th finally rolled around.  Launch party for the SigRun in Mentor, Ohio.  Everyone showed up.  Everyone, that is, except for the organizer.  He didn’t arrive until two hours after the event had already begun.  During that four hour stretch everything went off more or less as expected, with decals being applied to the cars, lunch from the food trucks, and so forth.  Sometime around 5pm we were all told to move into a private meeting room within the Audi dealership building.

It was at that time we were finally informed the bad news.  Signature Run was not to occur.  This blog post is not going to post hearsay or speculation, and I’m going to turn off commenting to avoid riffraff.  But I’m happy to relay what info was provided to me and the rest of the participants that fateful afternoon.

According to the event organizer, the only item paid in full was Friday evening’s plans.  This included a dinner at a restaurant on the East bank of the Flats in downtown Cleveland, and a limousine shuttle.  None of the hotels were paid in full, though it was indicated that deposits were made (and lost) since final payments never reached those establishments.  Events like the drag strip and others may have also been partially paid, but all hotels, activities, and meals, were not paid and were not going to happen.

It is unclear to the precise reason why this occurred, though it was said to be due to a last minute cancellation by a sponsor.  This still does not fully account for the cash flow that would have been provided by the 15+ attendees who were at the dealership.  Where was that $20-30k?  How was it spent?  Why did this happen?  And why did the parking lot appear to have only half the cars that had been quoted as attending?

It is crazy, looking back now, that the launch party even occurred.  Did anyone there know things were going south?  Were they trying to figure out a way to salvage the event last minute?  Stickers were being applied to cars over the four hour launch event, for an event that was already dead.  Why?  What really happened?

At this point of publishing this blog article none of these questions have been answered.  No refunds have been provided that I’m aware of, and the impression is that the funds were squandered away.  Many folks have filed disputes with PayPal, contacted their credit card companies, and reached out for legal assistance.  For most, this experience was extremely negative, and upsetting.  Hopefully all of us, myself included, will be able to get our money back at some point in the future.  But confidence is low of that actually happening.

A select few of us went to the dinner Friday, just to size it up, and salvage what we could from our lost money.  But many were too upset to attend, refusing to partake even in this singular item that was the skeleton of the original event.  In the end the SigRun event folded, and we all had prepared to go our separate ways, a little lighter in the pocket.

But most of us didn’t go home… not yet… 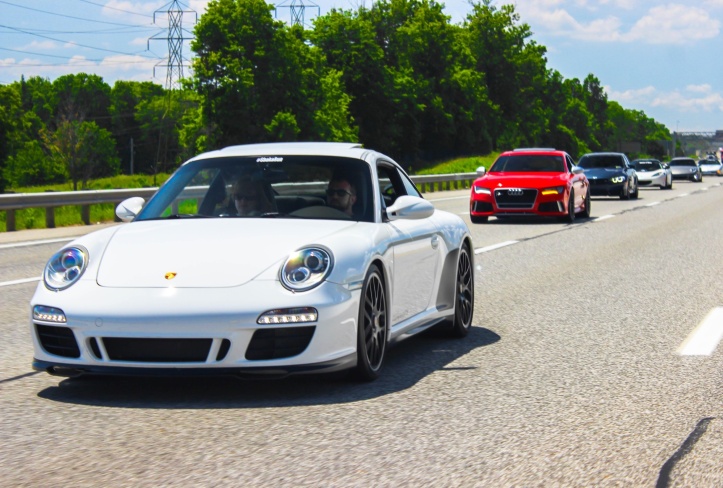 As I looked around the room at the attendees, I quickly realized that I personally knew 80% or more of the participants of the now defunct Signature Run.  Some folks picked up and left immediately, before I had a chance to talk to them.  But a few of us had taken time off work, found people to watch our kids, and basically committed ourselves to a fun weekend driving the roads of Ohio.  And while we might have been swindled in some sort of scam, we weren’t going to take it sitting down.

So as the evening hours grew on, we devised a plan to do our own event.  Since at this point it was going to be additional out of pocket costs, we focused on finding fun things to do that wouldn’t break the bank, to fit all affluence levels on the roster.  My friends and I reached out to the 20% we didn’t know, and did what we could to make the best out of an otherwise shitty situation.  Over the next 48 hours we managed to create a weekend that will not quickly be forgotten, as we had fun with what I called the ShakaRun (based on my high school nickname of Shaka that a friend/I had used).

Friday morning we all met up at a Starbucks just south of Cleveland, Ohio.  From there we took a scenic drive down the Ohio/Erie Canal by-way, stopping for a photo shoot at a local park.  After taking in the “nature run” (haha!) we made our way to BOSS Pro-Karting near the airport, for some indoor go-karting fun.  Sandwiches and pizza were enjoyed, and photos were taken.

After a few runs on the course we had some time to burn, so we headed over to Arabica in Parma for some refreshments.  Next we made our way to West Salem, Ohio to the recently upgraded facilities at Dragway 42 for their Friday evening Test & Tune event.  People had the chance to drive their car down the quarter mile strip, grudge match style against friends or strangers.  Best in our group was a red Audi RS7 making over 750 horsepower on race gas.  He pulled a 10.7 second ET trapping 130.81 MPH!!!

Sidebar:  With the temps in the mid-90s heat soaking the motor, not to mention and my tires being mediocre PS2s, I ran down the strip only twice.  My best run slip is photographed below, completed in my PDK equipped 2011 Porsche 911 Carrera GTS RWD.  It was a 12.8 at 107 MPH. 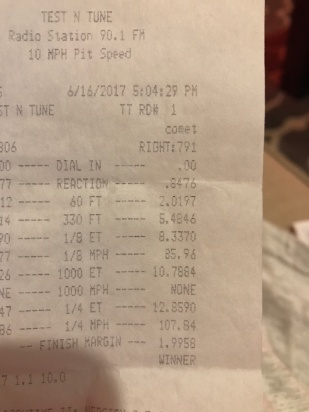 While the sun began to set, we cruised together down to Columbus, Ohio.  After parking our cars at our hotel, we enjoyed a group dinner, discussing everything from our disdain for the prior day’s turn of events, to our excitement for the plans yet to come.  Some of the more youthful members of the group hit the town that night, getting merely a few hours of sleep as we headed into our final day together.

On Saturday morning, after washing our cars and chugging our red bulls, most of us wandered over to visit two of the local Cars & Coffee events in the Columbus area.  We managed to re-collect a few attendees too, such as a red Porsche GT3 (991), and a red Ferrari 355 F1 Spyder, both who were original SigRun folks.  By now our total group had grown to a dozen cars, and a pretty diverse crew if I may say so myself.  From Porsche to Corvette, Ferrari to Audi, BMW to Jaguar — we had a little bit of everything!  Oh, and our recon Volkswagen, equipped with more electronics than a BestBuy store!

After we hit a BBQ joint in Logan, Ohio, we worked our way into the Hocking Hills park area.  Thanks to a few attendees who had driven the area before, we came prepared to do the Car & Driver loop, which we completed twice, once in each direction.  Here is the map of that loop:

By the end of the spirited driving sessions the vote was unanimous: we all wanted to do it again, soon!  Some of us want new tires before that happens, but we all wanted to go back, even before we left!  There are many other roads in the area worth experiencing, which we’ll save for next time we visit the area.  Here is just one brief in-car video my wife took from the passenger seat:

After saying our goodbyes, we all began to scatter back to our various home towns.  We had taken lemons, and made lemonade.  Nobody put their car into a ditch, and as far as I know, nobody got served with a speeding ticket (amazingly!).  Overall the weekend was a great success, and the feedback has been extremely positive.

VIP experiences cost money, and the Signature Run was supposed to offer one.  Instead, it delivered nothing but a mediocre meal on Thursday night, and only to less than half of the attendees.  It was a failure; an event that never got off the ground.

But true to form, we car enthusiasts came together to take the ashes of another event, to build our own.  #ShakaRun

Will we repeat our event in the future?  Heck yeah!  Perhaps some variations, be it invite only, or publicly.  We’re already working hard to create social media pages that will help us along with that journey.

One thing is for sure, though– most of us will be hesitant to provide anyone large sums of cash with the promise of a VIP road rally event. As such, any events I personally plan will be much like what we threw together last minute: everyone pays their own way, and just comes along for the ride.  Because really, that is what this has always been all about.

Good friends, old and new, hanging out, enjoying the ride!