Four days.  Fifteen hundred miles.  Over 60 gallons of petrol.  One half-dozen Red Bulls.  Three bags of beef jerky.  Ten bottles of Gatorade.  These are just a few of the items consumed during the weekend of Crown Rally South 2018.  Here is my quick recap from the weekend!

One of my long-standing bucket-list desires has been to partake in such an event.  It has taken some time to find the right one that offered the right balance of fun, driving, and general activities.  And also an event that fit my budget and schedule.  Earlier this summer one such event came across my plate, so I signed on as a proud participant of the Crown Rally.

When I first registered for the Crown Rally event I owned a 2008 Audi R8 (V8 6SPD).  But as is typical for me, my vehicles change frequently and that car was sold/traded just two weeks to the day prior to the rally.  With just 14 days to go before the event, 7 of which I was out of town on vacation, I had a new car in my hands to prepare: a 2015 BMW i8.

During that very short window of time I managed to get rally-ready: dash mount and hard-wire for my cell phone (to run Waze maps), hard-wire and BlendMount for my Uniden radar detector, and a few other odds/ends.  But the biggest visual upgrade was a used set of Vossen LC-104 wheels that I scored off the BMW forums.

Lucky for me this car already had window tint, and some paint protection film (PPF) on the front of the car.  Armed with some flashy blue wheels and some road snacks, it was time to set off!

Starting off my four day weekend was a roughly 350-mile journey from Cleveland, Ohio (Home) to the kick-off point in Chicago, Illinois.  During this travel leg I managed an average speed of around 72 MPH and 34.8 MPG.  Not too shabby!  My co-driver for the weekend (Jason) is a friend from the west coast, who flew into Chicago’s ORD O’Hare airport.  After picking him up early afternoon we headed into the city, topped off the gas tank, and visited a hand-wash car detail spot to get the car ready.

Upon arrival at the hotel we joined the dozen cars already privately parked within he deck of the W Lakeshore Hotel.  For those of us who needed it still, the folks at M.O. Graphics worked hard into the evening hours to apply final liveries/stickers.  As an added bonus the Thunderbirds were in Chicago doing test flights, so we were treated to some fine sounds by aviation’s finest!

We checked into our suite, freshened up, and headed to the reception overlooking Lake Michigan.  While we mingled with other teams we enjoyed the vistas not just of the city, but also some of the VIP cars that were stationed at the venue.  This included for example some McLaren cars, a stunning wide-body Mercedes-Benz AMG GT, and a hard-core Ferrari in full race trim supplied by Continental Auto Sports in Hinsdale.  After some cocktails and hors d’oeuvres we turned in for the night to prepare for the fun ahead!

Kick-off for day #1 began at Buckingham Fountain in downtown Chicago, Illinois.  Roads were closed off, Red Bull was handing out drinks, and the DJ was spinning jams to get everyone’s blood pumping.  With 100+ cars lined up and ready to go, the official word came and we were on our way!  One of my favorite photos that the official CR page posted from this weekend is below.  I’m not in it (sadly) … but it is stunning!  (plus a bonus photo of my car at launch right after that)

Winding our way out of town via Lake Shore Drive and the Dan Ryan Expressway, we headed towards Indiana.  Thankfully, the folks at Crown Rally try to make this more than just freeway sprints.  They do so by creating multiple check-points each morning & afternoon.  These various stops provide you not just a chance to clock in  but it also forces you to follow more scenic and enjoyable roads.  Let’s face it, these cars love the twists, and so do the drivers!

Sidebar:  With the scanning of your badge, the rally staff times you over the entire weekend.  At the end of the even a trophy is awarded to whomever has a total time closest to the designated time set by following all posted speed limits and local laws.  This year I believe the winner was only ~4 minutes off that time, which is quite impressive!

Our first day brought us to Tire Rack for our mid-day stop.  Here we received delicious local BBQ while watching other rally members participate in running a few laps on Tire Rack‘s test track course.  Sadly, by my own fault, I entered the facility in the wrong entrance, missing the correct check-point, and thusly, missed my change to sign up for the AX.

All was fine though as the rain made the runs a little slippery and marginally less enjoyable.  Still, much thanks to Tire Rack for the hospitality — we look forward to seeing you next year!  Hopefully I’ll do a better job getting in the right place next year, and can do a few laps around the course.

Friday afternoon took us in a southward direction, towards our final stop of Indianapolis, Indiana.  For the first time ever since being declared a National historic landmark/site, the city of Indy closed off the Sailors & Soldiers monument, providing the entire space for parking the 100+ cars of the Crown Rally, which was truly a sight to see!  Out of all the city venues we visited, my personal favorite was downtown Indianapolis.  Thanks to the folks of Indy for hosting us!!

Here is a short video I found. My car has a cameo at the very end:

Friday began with an arrival reception at the monument, with public interaction, and a small bier garden.  (Thanks Lagunitas for the complimentary drink for rally participants).  We closed Friday out with a visit to REVEL, a club just off the square in Indianapolis.  With music playing along side of video footage from prior Crown Rally events, drinks being slung to the attendees, a pool table, and more — it was a chance to unwind and have some non-car-related fun!

We left the beautiful city of Indy on Saturday morning with a police escort.  I could try and explain what that was like — but here is a short video clip that will do a far superior job than I really can.  It was a blast to blow through red lights and watch as the locals cheered us on to our second day of rally adventures.

Our second day would prove the superior of the two, especially if back country roads, twists, turns, and all-out adventure is your thing.  Beyond the amazing driving and superior roads, we also had the fun of entering areas without cell reception.  With many drivers not having in-car navigation, but my BMW allowing both GPS coordinate entry and working offline, I ended up the lead car for a single leg between check-points.  Regretfully (sorry again, guys/gals) this meant allowing the silly BMW nav to lead us down a roughly 2.5 mile gravel road which we travelled at only around 20 MPH.  CRAZY!!

Sidebar:  For those curious, we managed around 22 MPG on both the first and second day of driving.  This was surprising, given our rates of speed and such.  I was thoroughly impressed with the BMW i8 as a rally car.  Having the on-board GPS entry capabilities, the comfort and confidence of the AWD system, and of course the looks– it was perfect for our trip!  It also helps that my co-driver Jason was a huge help, and a blast to laugh with as we took in the weekend with smiles!

Our lunch stop on day #2 overlooked a beautiful small lake, and provided some wholesome Amish cooking.  Here is a photo taken there:

Zack took some great photos from the event, and this one particular photo-set captures some of the adventures of day #2 very nicely:

One of the more interesting parts of the 2nd day were also two historic bridges we passed over.  You can see them on my Instagram page in the saved stories, and here is a nice still-photo of one bridge, adorned with wooden planks (scary!).

Saturday ended in Nashville, Tennessee with each member handed a bottle of champagne, and given a photo-op with the formal media peeps (photo forthcoming).  Our hotel for the night was right in the heart of downtown Nashville, providing us a chance to unwind, grab dinner, and clean up before the final awards.

Our evening ended in a very VIP fashion.  Located on the 27th floor of our hotel was a swanky bar, with a private loft just for us Crown Rally folk, overlooking the city.  Here the gentlemen from Canada who had driven over 20+ hours just to get to Chicago won the coveted Trophy Crown, and the gorgeous camp-blue Lotus won “Best Mod” award.  I believe the Freaky-Fast JJ’s team won best livery?  Also, I brought home a nice crystal award for being #4 of the top 5 donations collected for the Epilepsy Foundation.

And thus ended the two days of rallying!

Holy shit! To top the incredible weekend off I won the “Best Mod” award! There was only like 3 or 4 awards given all together so the fact that I got one is unbelievable! The best mod was for the camo wrap, I busted my ass to get it done and getting this award means more then I can explain. I am so honored and appreciative to everyone at @crownrally you guys are family. Btw the guys with me are Canadien and drove 30 hours to do the rally with their black Lambo. They win best spirit! I will NEVER miss a @crownrally ever again. Thank you 💙

AND THAT’S A WRAP

Closing out the “guys trip” meant a quick lunch stop Sunday at Hattie B’s for some hot chicken, before dropping Jason at the BNA/Nashville airport for his journey back to Los Angeles.  From there I drove 533 miles home, with a 72.5 MPH average and a pretty respectable 32.7 MPG.

In just 18 days of ownership I’ve already put over 2,000 miles on the BMW i8.  It has proven to be a lot of fun to own, receiving quite a bit more attention and compliments on the event than I could have imagined.  But more importantly, I can look back and say that memories were made, and the weekend was a success.  And with that said…. when can we rally again?  Looking forward to my next adventure, and especially my next Crown Rally event.  Thanks! 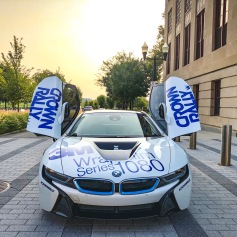 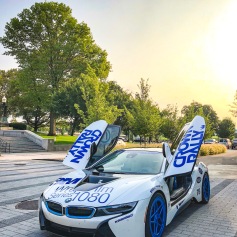